BC/OC is receiving increasing attention from both the scientific community and the public in China, as the rapidly developing areas in northern China have observed visible air pollution. Providing accurate present-day modelled atmospheric composition of BC/OC, as well as possible future developments, to society and policymakers is critical. A key step towards this is to use up-to-date emission inventories and carefully evaluated models. 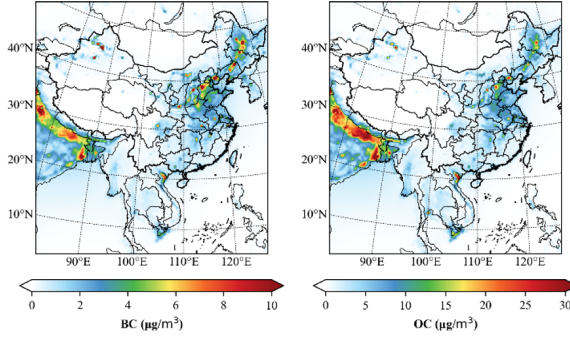 Atmospheric concentrations of air pollutants are also simulated with the global chemical-transport model OsloCTM3 using the new Chinese emissions provided within the project. Results are evaluated against measurements and compared with corresponding output using the most recent global emission inventory, the Community Emission Data System 2021 release (CEDSv21). For the simulations, we replace CEDSv21 emissions with the new inventory in China, keeping the former for the rest of the world. Figure 3 shows the resulting annual mean burden of BC, primary organic aerosol (POA), sulfate, and nitrate aerosols using the new emissions (top) and the ratio between the new inventory and CEDSv21 (bottom).

As shown by the top panels, the air pollution levels are higher in the more densely populated eastern China region, whereas lower pollution levels are seen further west, in agreement with the emission patterns. We note that while local emissions dominate the pollution levels, some pollution is also transported in over China from neighbouring regions such as India in these global simulations. For China as a whole, emissions from the new inventory are lower than in CEDSv21 for all provided species except OC, ranging from 9% lower for total annual BC emissions to 43% lower for SO2 emissions. This result in lower regionally averaged atmospheric burdens for BC, sulfate, and nitrate but higher burden of organic aerosols, compared to model simulations using CEDSv21. Underlying these regional means are regional differences. For instance, while the sulfate burden is consistently lower across China with the new emissions, by up to 20-30% in some areas, BC and POA burdens are higher in the northeast and northwest by up to 60-70%, but lower to the southeast. Hence, both absolute magnitudes and spatial distribution of emissions contribute to the differences between inventories, sometimes in opposing directions.